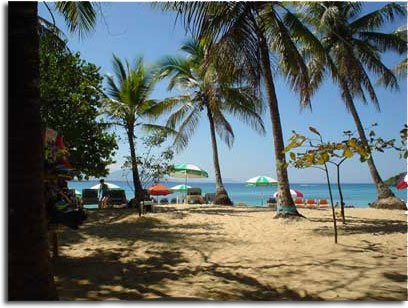 Sosua is our other town on the Dominican Republic North Coast within the Province of Puerto Plata. It is situated between Puerto Plata City and Cabarete. It has an interesting history because it became home to some 600 Eastern Europe Jews in the early 1940s. At that time as Nazi Germany expanded the persecution of Jews some countries offered refugee status and allowed immigration and the Dominican Republic allowed a fairly large group to settle in what is now the town of Sosua. Many of the town’s streets are named for Ashkenazic Jews. and there is still a small synagogue in the El Batey neighborhood of the town. This is still occasionally used by Jews from the surrounding communities There is also a small museum documenting the history of the Jewish community in Sosua.

Playa Sosua is the town's main beach but not the only one near to the town. It is a fun, colorful and lively beach, approximately one kilometer long, with a group of colorful timber units along the back, selling food, drinks, and souvenirs. This beach is very popular and offers a superb option for snorkeling enthusiast. From the beach you can swim out to the reef, about 100m offshore and swim with the colorful fishes that abound here.

This is one of several differences to Cabarete, which is more well known for kiteboarding and windsurfing. Sosua is better known for its snorkelling and scuba diving. You can learn to dive here at one of the many schools that offer tuition and certification as well as diving excursions on the reefs and wrecks.

One of the other beaches, Los Charamicos, can be found at the end of Playa Sosua beach. This is located in what can best be described as a more local's neighborhood and residential area and as such is somewhat less touristy and is a bit more lively than El Batey. Another beach, Playa Alicia, is accessible from the "On the Waterfront" restaurant. This beach is quieter than Playa Sosua, and as such is a good option for those who want to enjoy a more relaxed experience.

Another difference between Sosua and Cabarete is that in Sosua you will find more of the traditional hotel accommodation on offer than in Cabarete. Cabarete has more condo or aparthotels than the standard hotel accommodation offering a full board or all-inclusive holiday.  Sosua has a wider mix of both types and can cater to a mix of tourists.

Sosua is also popular as a residential area with many ex-pats having moved there over the years.  Many of the local bars and restaurants are owned by those who have fallen in love with the town and moved to both live and run businesses there.

For those looking for a second home, holiday home or permanent residence Sosua offers a wide selection of choices. From beachfront condos or villas to communities of villas and condos inland with views over the surrounding area and coast. Here again, good advice and recommendations to lawyers, real estate agents and local services are all important and we do hope that locals who have lived here and got to know who to trust and rely on will help newcomers by making use of the Add a Business facility. This not only makes life easier for people looking for reliable service but rewards local businesses that rely on recommendations to make a living.

As with Cabarete, Sosua offers a wide range of restaurants providing cuisine from all over the world. German, Italian and English restaurants vie with traditional Dominican eateries. WiFi is frequently available as a means to attract custom. Additionally competitive prices and larger than normal portions are often served!

Sosua is also very close to Puerto Plata airport which makes arrival and departure a relatively quick and easy exercise. Having a long and arduous transfer time from the airport to accommodation or home at the start or end of a journey is not everyone's cup of tea so a quick 15 minute comfortable taxi ride is much more attractive.

Sosua is also not far away from the main city of Puerto Plata with its wide range of supermarkets and large stores. You can find more information about Puerto Plata on our Puerto Plata Page.